A leaked OPCW document on the alleged chemical attack in Douma (Syria) which took place in April 2018  concludes the attack was likely staged. OPCW confirmed in a response to questions the report is authentic.

The document was leaked to the British-based Working Group on Syria, Propaganda and Media made up of academics and PhD students from a variety of UK universities. The Times wrote that the group was “spreading pro-Assad disinformation”.

Contrary to the leaked document , the OPCW official report concluded two cylinders containing chlorine were likely dropped from air. The means the Syrian armed forces would be responsible as the only party in the conflict having aircraft.

The document is a ‘draft for internal review’ and marked it was marked  “do not circulate” is dated February 27, 2019. On March 1, 2019 OPCW issued the final report on the Douma incident.

The document is an engineering assessment and studies if the cylinders could have been dropped  by aircaft. The report does not study the cause of death and if a chemical was used or not.

The document says “The dimensions, characteristics and appearance of the cylinders, and the surrounding scene of the incidents, were inconsistent with what would have been expected in the case of either cylinder being delivered from an aircraft”.  It means that according the leaked report the barrels must have been manually placed on the balcony and bed.

The document is signed by a South African citizen named Ian Henderson. In this 2018 document by OPCW Henderson is mentioned as OPCW Inspection Team Leader. Other documents indicate Henderson has been working for OPCW in investigations related to chemical warware. It seems that he is a dissenting voice within the OPCW.

A statement of the OPCW in response to questions about this leaked document says:

Pursuant to its established policies and practices, the OPCW Technical Secretariat is conducting an internal investigation about the unauthorised release of the document in question.

Brian Whitaker has a very good overview of the leaked document and some background.

In this document dated May 28, 2019 OPCW Director-General Fernando Arias explained the leak of the document. He wrote;

At the time of the FFM deployment in Douma in 2018, this staff member was a liaison officer at our Command Post Office in Damascus. As such, and as is customary with all deployments in Syria, he was tasked with temporarily assisting the FFM with information collection at some sites in Douma.

I stand by the impartial and professional conclusions of the FFM that there are reasonable grounds to believe that the use of a toxic chemical as a weapon took place in Douma on 7 April 2018. This toxic chemical contained reactive
chlorine. The toxic chemical was likely molecular chlorine.

He also explained why the conclusions in the document were not part of the final OPCW report on Douama:

The document produced by this staff member pointed at possible attribution, which is outside
of the mandate of the FFM with regard to the formulation of its findings. Therefore, I instructed that, beyond the copy that would exclusively be kept by the FFM, the staff member be advised to submit his assessment to the IIT, which he did, so that this document could later be used by the Investigation and Identification Team( IIT).

An interesting statement is this;

“In March 2019, I received the first indication that an internal document pertaining to the Douma incident, produced by a staff member could have been disclosed outside of the Secretariat.”

Brian Whittaker writes about the OPCW statement in this blog and makes an interesting observation.

On 26 April — a fortnight before Henderson’s document surfaced on the internet — Russia sent the OPCW a nine-page critique of the official Douma report (to which the OPCW has since replied).

Could it be Russia obtained the document written by Henderson, and then handed it over to the Working Group on Syria, Propaganda and Media ?

Early June OPCW Director-General Fernando Arias said the leaked OPCW-document on the alleged Douma chemical attack has been given to the OPCW Investigation and Identification Team who has the mandate to attribute responsiblity. The Director-General addressed the audience of the 2019 Bratislava Forum, the annual conference of GLOBSEC, a think tank committed to enhancing global security, prosperity and sustainability throughout the world.

The main stream media hardly reported about this leaked document. Only Peter Hitchens, who writes a column for Mail on Sunday, paid attention to the document. Later Fox spend some time, Independant Robert Fisk wrote a column. Belgium VRT published a very good article about the leaked document here.

After OPCW released the document dated May 28, at June 13 French news agency AFP published an article. It was published by France24 and Daily Mail.

Theodore Postol, professor of science, technology, and international security at the Massachusetts Institute of Technology, provided the Institute for Public Accuracy with his initial assessment of the newly revealed OPCW document. Postol has been in many debates with Eliot Higgins, founder of Bellingcat, about which party in Syria was responsible for alleged chemical attacks.

There are many unanswered questions about this scenario. How could the rebels produce chlorine and fill the cylinder. OPCW did not find any evidence for a lab inside Douma.

Also the cylinder shows grid marks which size are similar to the fence which was located on top of the balcony.

The balcony has some signs of fragmentation caused by explosives but not on all of the walls of the balcony. 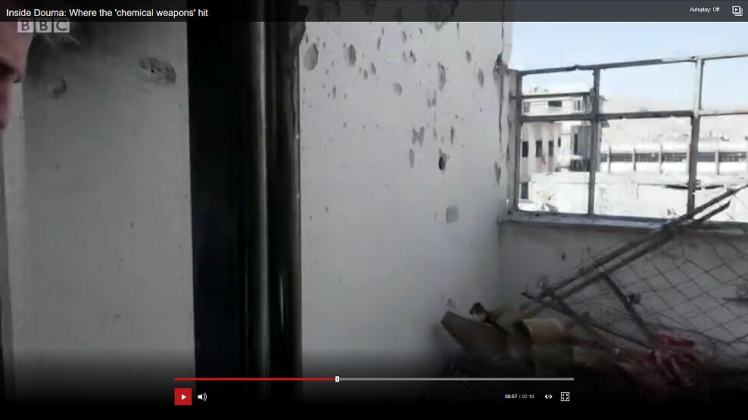